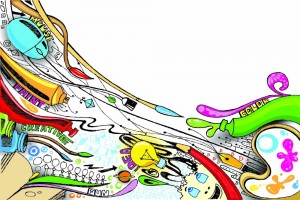 At first, the project consisted of Guyton painting a series of houses on Detroit’s Heidelberg Street with bright dots of many colors and attaching salvaged items to the houses. It was a constantly evolving work that transformed a hard-core inner-city neighborhood where people were afraid to walk, even in daytime, into one in which neighbors took pride and where visitors were welcomed. Tyree Guyton worked on the Heidelberg Project daily with the children on the block. He and director Jenenne Whitfield gave lectures and workshops on the project around the country. Their main goal was to develop the Heidelberg Project into the city’s first indoor and outdoor museum, complete with an artists’ colony, creative art center, community garden, amphitheater, and more.

The Heidelberg Project offers a forum for ideas, a seed of hope, and a bright vision for the future. It’s about taking a stand to save forgotten neighborhoods. It’s about helping people think outside the box and it’s about offering solutions. It’s about healing communities through art. The Project works with neighborhood children to educate them on art, community and environment. These children walk to school past burned-out houses, debris, corruption and deterioration. The Project purpose is to offer them another view, another perspective, to positively change the environment the children see every day. In the process, they help build self-esteem and foster a sense of pride in their community. The Project continues to work with local students throughout Metro Detroit through the ACE2 program and guided tours.