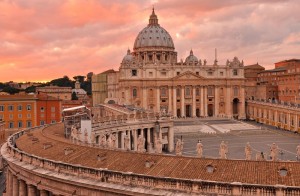 Vatican City is a sovereign city-state whose region consists of an enclosed enclave within the city of Rome. It has an area of approximately 110 acres, and a population of just over 800. This makes Vatican City the tiniest independent state in the world by both area and inhabitants. Vatican City State was established in 1929 by the Lateran Treaty.   Ordinances of Vatican City are published in Italian. Official documents in relation to the faith are issued mainly in Latin.

Vatican City is an ecclesiastical state, ruled by the Bishop of Rome, the Pope. The highest state officials are all Catholic clergymen of various national origins. It is the sovereign territory of the Holy See and the location of the Pope’s residence, referred to as the Apostolic Palace. The Popes have generally resided in this area even before the treaty area since the return from Avignon in 1377, but have also at times resided in the Quirinal Palace in Rome and in other places.

Located in Vatican City are the Vatican Gardens which comprise of more than half of the territory. The gardens were established during the Renaissance and Baroque era, and are decorated with fountains and sculptures. The gardens cover approximately 57 acres which is most of the Vatican Hill. Stone walls surround the area in the North, South and West. The gardens date back to medieval times.

Saint Peter’s Basilica is a Late Renaissance church located within Vatican City. Designed predominantly by Donato Bramante, Michelangelo, Carlo Maderno and Gian Lorenzo Bernini, St Peter’s is the most renowned work of Renaissance architecture.  It still remains one of the largest churches in the world.  Saint Peter’s is regarded as one of the holiest Catholic sites.

The basilica is the burial site of its namesake Saint Peter, one of the twelve apostles of Jesus. Tradition and some historical evidence say that Saint Peter’s tomb is directly below the altar of the basilica.  There has been a church on this site since the 4th century. Construction of the present basilica began in 1506 and was finished in 1626. St Peter’s is famous as a place of pilgrimage.  The Pope presides at a number of services throughout the year drawing audiences of 15,000 to over 80,000 people; this is done either in the basilica or in St. Peter’s Square.

Whether you enjoy travel to exotic places or those a little closer to home, Tradewinds Vacations invites you to travel with us.