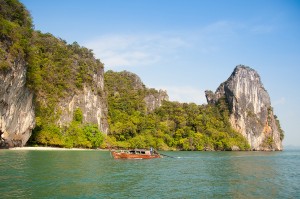 Malaysia is a constitutional monarchy in Southeast Asia. The capital city is Kuala Lumpur, while Putrajaya is the base of the federal government. The country is multi-ethnic and multi-cultural.  This plays a large role in politics. The head of state is the King, and the head of government is the Prime Minister. In 2010 the population exceeded 27.5 million. It is located in the tropic.

Some of its waters in the Coral Triangle, the waters around Sipadan Island and the Sulu Sea of the eastern part of the country, are a biodiversity hotspot, with 600 coral species and over 1000 fish species. Two thirds of Malaysia is covered in forest, and some of the forests are believed to be 130 million years old. There are around 14,500 species of plants and trees. These forests are home to the Rafflesia genus, the largest flowers in the world, with a diameter that can reach 3 feet. The Malaysian government tries to balance economic growth with environmental protection. 28 national parks have been established. Tourism has been limited in areas such as Sipadan Island because animal trafficking is a huge issue.

Traditional Malaysian art excels in the areas of carving, weaving, and silversmithing. Local artwork includes the ornamental Kris, beetle nut sets, and woven batik and fabrics. Native East Malaysians are known for their wooden masks. Traditional Malay music is based around percussion instruments, the most important being the drum.  There are at least 14 types of traditional drums. Music is customarily used for storytelling.

Malaysia’s cuisine reflects the multi-ethnic and multi-cultural influences of its population. Many of the influences come from the Malay, Chinese, Indian, Thai, Javanese, and Sumatran cultures.  This is primarily due to Malaysia being art of the ancient spice route.

October to November is the optimum time to visit Malaysia.  The two monsoon seasons have passed; the temperatures have lowered and are still warm enough to enjoy the beaches and diving.  It is also before the high holiday season of December and January where everywhere is overcome with local travelers on vacation.